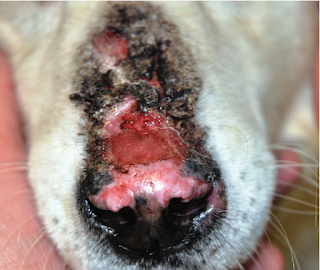 Transmission or Cause: Discoid lupus erythematosus (DLE) is an autoimmune disease in which the animal’s own antibodies attack normal components of the skin. DLE is a benign variant of systemic lupus and has no systemic involvement. There is strong evidence that sunlight induces and/or exacerbates the disease process.

Affected Animals: DLE affects dogs and cats, but where it is the second most common autoimmune disease in dogs, it is very rare in cats. There appears to be neither a sex nor age predilection in either species. Collies, German shepherds, Shetland sheepdogs, Siberian huskies, Brittany spaniels, and German shorthaired pointers have demonstrated predilection for DLE. 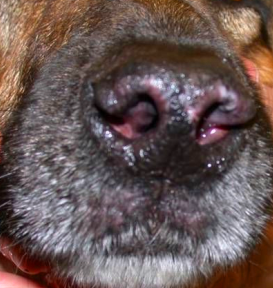 Clinical Signs: Clinical signs of canine DLE include loss of pigmentation where the brown/black color of the nose changes to a slate blue or pink color, redness, and scaling of the nose. The disease can ultimately progress to significant destruction of the tissue, resulting in ulceration and crusting of the nose. Lesions may rarely involve the ear flaps, mouth and area surrounding the eyes. The affected dogs are otherwise healthy. In cats, DLE most commonly affects the ear and face, resulting in redness, scaling, crusting, and hair loss. Aside from the dermatologic lesions, affected dogs and cats are otherwise healthy.

Diagnosis: As this disease can resemble other more serious diseases, including epitheliotropic lymphoma (cutaneous lymphoma), pemphigus, and systemic lupus, it is important to get a definitive diagnosis. Diagnosis is based on a supporting clinical history and biopsy with histopathology. Biopsy of the Discoid Lupus nose requires sedation or general anesthesia. The nose will be numbed prior to biopsy, and sutures (stitches) will be present where the biopsy was taken.

Treatment: Treatment is variable and often dependent on severity of lesions. In some dogs, sun avoidance alone may be sufficient in controlling the disease. In more affected animals, therapy may include any individual or combination of the following: topical and/or oral steroids, oral doxycycline, an antibiotic with anti-inflammatory and immunomodulatory properties combined with niacinamide, a vitamin B derivative, and tacrolimus, an immunosuppressive topical ointment. Sun avoidance is essential in all affected animals, with applications of sunscreen providing additional protection.

Prognosis: The prognosis of DLE is generally good, as this does not cause systemic illness.
Posted by Dermatology for Animals at 12:26 PM