Transmission or Cause: This condition is a result of a decrease in production and release of the T4 and/ or T3 hormones that are produced by the thyroid gland. The most common cause of Hypothyroidism is degeneration or inflammation of the thyroid gland. Other causes of this condition may include: congenital (hereditary) disease, iodine deficiency, malignancy (cancer) or the lasting response of some medical treatments. 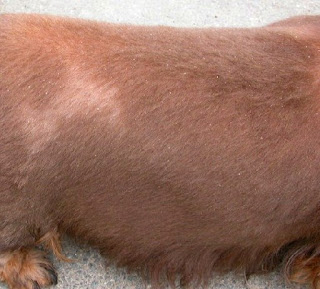 Diagnosis: Blood work will be submitted to the laboratory to measure the level of the thyroid hormones. Further laboratory work or diagnostics may be imperative for diagnosis.

Treatment: Treatment involves the synthetic supplementation of the thyroid hormone by administration of an oral medication for the duration of the pet’s life. Further diagnostics will be warranted if limited response is observed, which will be decided by the treating veterinarian.

Predisposed Dogs: There are several breeds of dogs that are predisposed to this condition. These breeds include: Golden Retrievers, Labrador Retrievers, Boxers, Poodles, Great Danes, Cocker Spaniels and Doberman Pinchers. This condition is more commonly diagnosed in middle aged, sexually altered dogs. 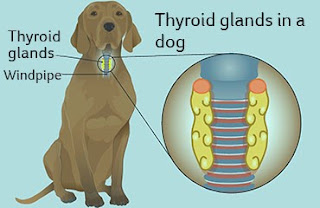 Prognosis: The prognosis of this condition is dependent on the cause. Generally, this condition has a very good prognosis. This condition will likely need long term daily treatment. When the thyroid hormone has become regulated with treatment, the symptoms will decrease and the pet’s quality of life will improve over time.

Long Term Management: Medication will need to be given once to twice daily long-term for the control of this condition. Initially, blood work will need to be preformed every 4-6 weeks until the levels are within an acceptable range for improvement. Long term, blood work will be required at least every 6 months to measure levels to determine appropriate dosing. It is probable that the dose of medication may need to be adjusted at some point during this process.

Posted by Dermatology for Animals at 1:14 PM No comments:

Why Does My Dog Get Ear Infections?

Why Does My Dog Get Ear Infections? 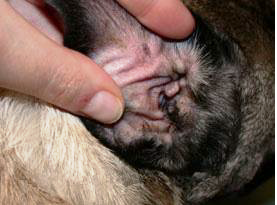 Transmission or Cause: Possible causes of otitis externa, which may lead to infections of the middle and inner ear, include allergies, hormonal diseases, excess moisture in the ears due to swimming or bathing; inappropriate treatment or cleaning of the ears such as may be caused by the use of cotton-tipped applicators; excess wax production in the ears; or a foreign body or tumor that is obstructing the ear canal.


Affected Animals: Dogs and cats. Cocker spaniels and other long-eared or floppy-eared breeds may be more predisposed to developing infections.

Overview: An ear infection, or otitis, is an inflammation of the outer, middle, or inner ear canal. Most frequently, an animal will develop otitis in the outer ear that may worsen and spread into the middle ear. Once in the middle ear canal, the inflammation can move into the inner ear or, in cases in which the otitis has originated in the middle ear, the infection can instead progress outward to the external ear. Otitis can be caused by a tremendous array of factors, including allergies, hormonal diseases, excess liquid in the ear from swimming, autoimmune diseases, skin parasites, and excess wax production.


Clinical Signs: Clinical signs can vary depending on the severity and location of the infection, but typical symptoms of otitis include pain and erythema of the pinna (earflap), head shaking and scratching of the ears, and pus and malodorous exudate coming from the ear canal. The animal may tilt the affected ear downwards and may roll or lean to the affected side. If both sides are affected, the animal may be deaf or wobbly. Some animals may be nauseated, vomit, and have Horner’s syndrome (constricted pupil of the eye on the same side as the ear infection). Any neurological clinical signs indicate significant middle ear or inner ear disease.

Symptoms: Ears that are red, painful to the touch, and produce a foul-smelling discharge are symptomatic of otitis. Typically, a animal with an ear infection will scratch and shake the ears or may tilt the affected ear downwards. Animals that are affected more severely may show some neurological signs such as rolling or leaning to one side. If both ears are affected, the animal may be deaf or off balance and uncoordinated. Some animals may be nauseated and vomit. Also, some animals may get a condition called Horner’s syndrome in which the pupils are sized differently and the nictitating membrane (third eyelid) is raised. This condition indicates that a nerve has been affected by the inflammation from the middle ear. Any neurological clinical signs indicate significant middle ear or inner ear disease.

In serious cases of otitis, the skin begins to form into folds in which the infection can become trapped, making cleaning and use of topical treatments very difficult. In addition, the skin will secrete more wax and debris that allows yeast and bacteria to overgrow, causing further disease. Severe inflammation leads to permanent skin thickening, mineralization, and narrowing of the ear canals. Once this occurs, the only viable treatment will be surgical removal of part or all of the ear canal. 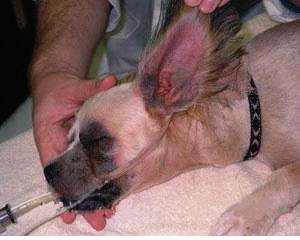 Diagnosis: The veterinarian will make a diagnosis based on the clinical signs, physical exam findings, and through the use of several other diagnostic tools. One such tool is cytology, which involves taking a swab of the ears and looking at the material collected under a microscope for the presence of bacteria, yeast, mites, and other substances that might cause an infection. Bacteria and yeast are normally present in low numbers in all animals’ ears, but a large presence will lead to an ear infection.

Prognosis: With proper treatment, otitis externa usually will resolve within three to four weeks, although it may recur in certain animals. Animals with otitis media or otitis interna may need 1-3 months of systemic antibiotics. The key for long-term success is correcting or treating the underlying problem that led to the development of the otitis.

Treatment: After the cause of the otitis has been diagnosed, the veterinarian usually will perform a thorough cleaning of the ear canals while the animal is under sedation or general anesthesia.

The surgical correction of the ear canals may be necessary in cases of severe infection. One type of surgery, called a lateral ear canal resection, allows the ear to drain more easily, decreases the amount of humidity in the ear, and makes topical treatments easier to apply. A total ear canal ablation, a complete removal of the ear canal, is performed on animals with severe, chronic ear disease that is nonresponsive to medical therapy.

Prevention: Prevention is best accomplished when the veterinarian is able to determine the underlying factors that can lead to development of otitis.


Posted by Dermatology for Animals at 9:50 AM No comments: